I know I'm way too new to this blogging thing to be moving, but oh well. It's happened. I'm switching platforms to wordpress, which already seems so much easier to use with a phone, and in the process I'm rebranding myself as a cat lady. My new blog is: www.flowercatdesigns.wordpress.com.  Update your readers! I promise there is more sewing content coming soon!

October has been productive! I know you can't tell, but I've actually been sewing quite a lot. Hopefully after this weekend I'll have some photos, but we'll see. Actual sewing is coming before blogging right now, as it should! I also knit Dandelion a little gray mouse that he found and pulled out of the laundry after I felted it. He knew it was his somehow : ) He's really our little darling. We hardly remember life before him!

I've been doing a lot of sewing, and it sure does feel good! I've only actually finished one thing though: Cation Design's free dolman top pattern, which is AMAZING! I've already worn it so much it needs a wash before taking blog photos...

Right now I have unfinished on or around my table:
If I focus I could finish all of these projects easily this weekend. However, I really want to make another Cation top and I just got a stack of Sewaholic patterns in the mail, including the Renfrew. My small office is dressing up as one of our coworkers for Halloween next week, and I need a black and white striped tee. I'm just going to see what type of stripes JoAnn has when running errands this morning... I have a feeling a Renfrew is meant to be this weekend!

***The following is no longer relevant. I stopped by Ross when running errands, just too check, and I found a gown! I'm free! It's black, boring, and made out of some horrible polyester knit that will never, ever wrinkle. It's perfect! In other news, I did not find a single black and white striped knit, except for a few zebra prints. Why is that classic combination so elusive??

I'm feeling pretty great about all the sewing going on, but there is a cloud on my horizon. I found out last week that our Holiday Event is black tie this year and I need another gown. I just can't face that again yet! I may buy something, and the thought of David's Bridal actually crossed my mind a couple times. I'm also thinking about this dress, which is just a summer jersey maxi dress. What do you think? Does black make it formal enough? I could make a beaded belt or and add some beading at the neckline. Again, I'm working not attending, so no one's really going to be looking at me and comfort is first priority.

Any ideas or advice on this one? I want the next gown I sew to be black and simple. Something that could be worn for any formal event that pops up like this. 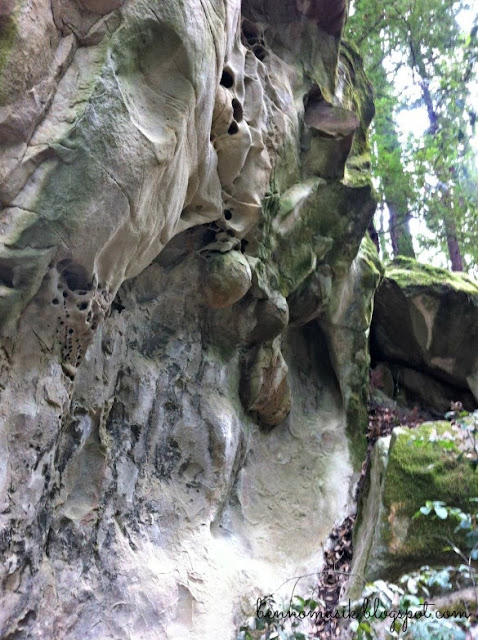 We managed to pull ourselves away from our kitten to go for a little hike the other day! I haven't been out in the woods for a long time, and it felt so good to get some fresh air. 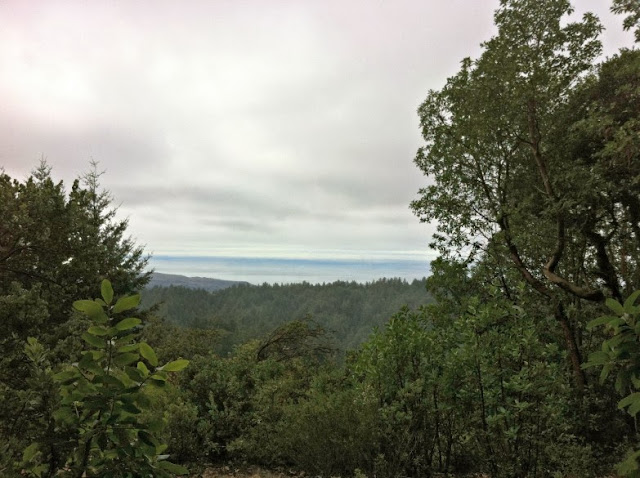 We didn't have much time, and just went a few miles out to see the Tafoni Sandstone Formation. The trail starts off of Skyline Boulevard in the mountains near Woodside. It's just three or four miles round trip with a little gain, and makes for a nice walk. The sandstone formation is quite impressive, and there's also a little viewpoint picnic area just a little further on where you can see out to the ocean on a clear day. 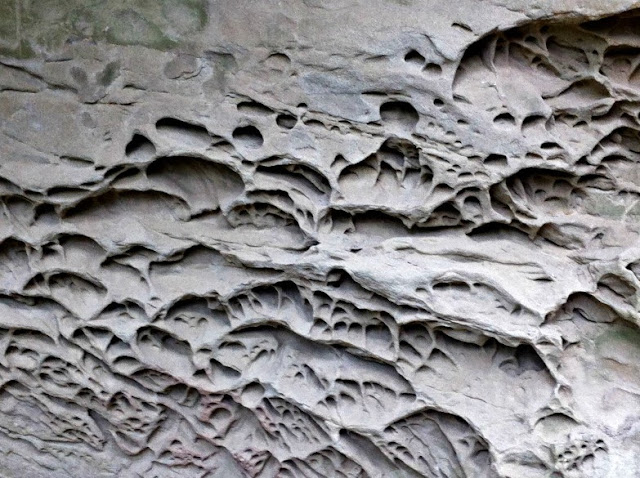 When we got back to the parking lot, we saw a sign directing us to the Methuselah Tree right across the highway and we decided to check it out. I'm not sure why our guidebook doesn't mention that it's worth it to take that extra .1 mile walk to see this enormous tree, because it really is! Most of the redwoods in this forest were cut down to build San Francisco, but a few old trees still exist. It's a treat to see them, but it always makes me a little sad wondering what this forest would have looked like if it hadn't been so intensely logged. This tree is estimated to be 1,800 years old and has a trunk diameter of 14 feet! 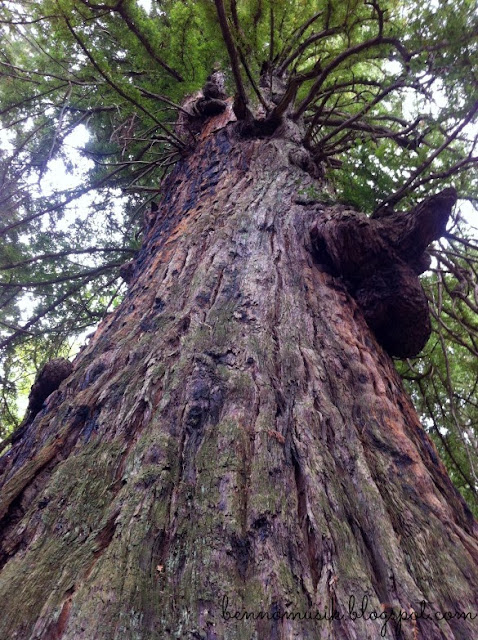 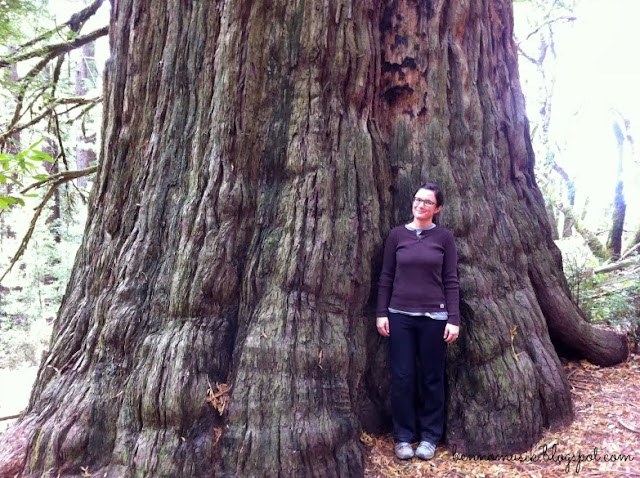 September was the month of the kitten. Besides work, and there was a lot of that, I really didn't do anything but hang out with my cat. I've been really itching to sew, but then he gets in my lap to snuggle and that's that. I'm glad he's an affectionate cat, though, and I hope this isn't just a kitten phase! 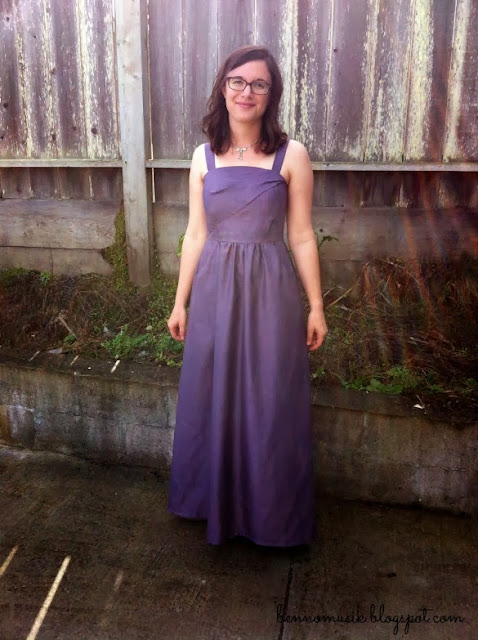 I can't believe Opera Ball was almost a month ago! I got my dress finished in time, but didn't get a photo taken that night. It was just too crazy! I should have though, on the grand staircase of the majestic San Francisco City Hall where the event was held. That week was pretty insane. I work in education, not events, so my workload was totally unrelated to the ball and we had a couple issues pop up at the end of the week. Dealing with that while being pulled in the other direction for my added event responsibilities left me little time to care about how I actually looked. Besides, I was just scurrying around checking attendees in, folding napkins, checking place cards and seating charts, trying in vain to get people to sit down for dinner, cleaning up volunteer meals, schlepping boxes back to the office at 2am, and so on. It's hard work!

I ended up making Vogue 1176, an OOP Michael Kors pattern. I added a gathered skirt with big pockets to store my phone, badge, and keys, and these pockets were the envy of every one of my coworkers. Seriously, you could see the look of longing appear on their faces as they noticed me whipping my phone out! The dress served its purpose, but I don't feel very sophisticated. I think the combination of the too-short skirt, the wide straps, and, well, maybe the pockets too make it feel a little frumpy. 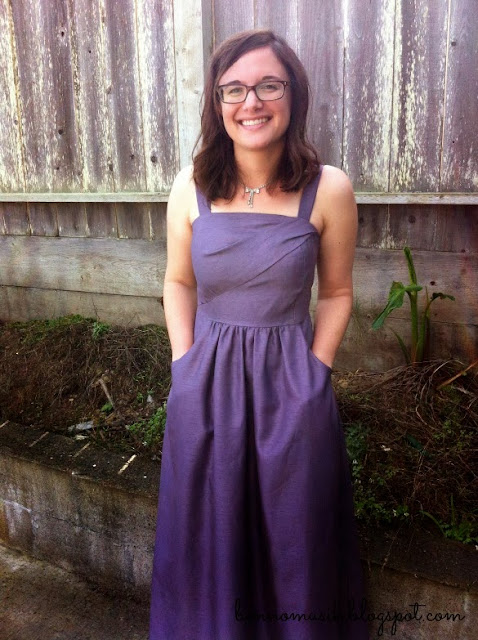 I also had some trouble making this dress. First, I ran out of fabric! I had bought four yards, which seemed like an infinite amount. I usually make a dress using no more than two yards of fabric, since I'm short and on the smaller side, and I really didn't think that a long, full skirt would take that much extra fabric. I wanted the skirt to be cut in an A-line shape with gathering at the top, so that it would have a pretty full skirt by my shoes to keep them hidden. That was absolutely not going to happen, and this skirt not only isn't full enough to not show my shoes, but it's also too short. I didn't want to step on it, but I think it needs another couple inches at least. 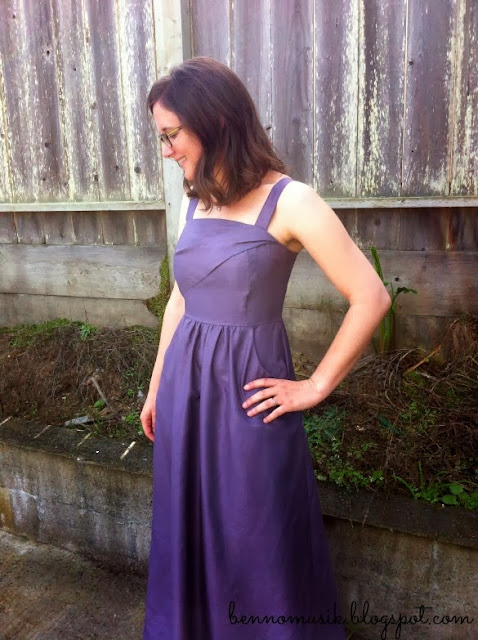 Then the bodice... it was fun to put together, and for a 100% polyester fabric it was pressing pretty well. But then I tried it on and realized it was really big. Too big to just take in at the side seams. Everyone always talks about the extra ease in McCall, Butterick, Vogue, and Simplicity patterns, and I'm always skeptical because I tend to sew Simplicity and Burda and I have never, ever had a problem with excess ease in a Simplicity pattern. I might become a believer when it comes to Vogue, though. I had to take it in three whole inches at the waist, and could easily take in another inch, and also took it in about one inch at the bust. The alterations were distributed through the side and back seams, but I couldn't really take it in on the front due to the design and you can tell. It's pretty baggy under the bust. I feel like the fit is acceptable, but it was problematic and I don't really care about making another version to figure out all that was wrong. 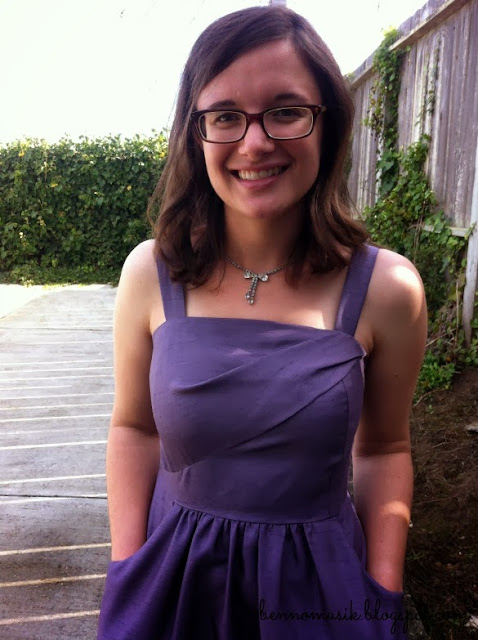 I still love the color (more gray, less deep purple than the photos show) and the draped detail of the bodice, and I think I'm going to cut the skirt to knee-length to make it into a cocktail dress that I think will be much more successful.
23 comments:

Happy September! August was really about not feeling well and trying to get better, unfortunately. I did do some fun sewing though, with my vogue dress and gown, which coming along and will be finished in time! I'm really looking forward to September. I'm feeling better, and the endless fog is just beginning to lift. September and October are supposed to be SF's "summer," and I'm looking forward to it!

August ended on a very high note because we adopted a kitten yesterday!! He's an Abyssinian/Tabby mix, and is four months old. I think we're calling him Dandelion. How am I ever going to get that gown finished with this sweet kitten around?? 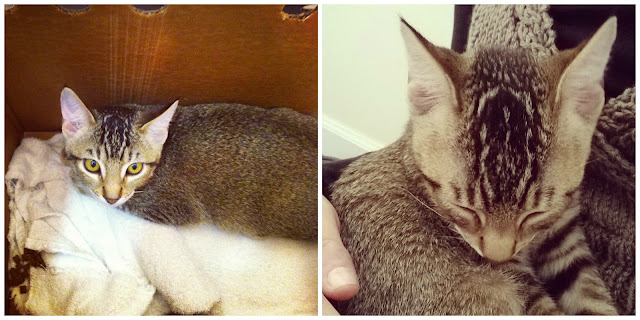 Welcome to my site! 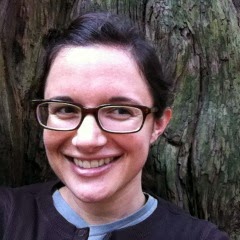 I'm Kelly, an aspiring dressmaker from San Francisco. I document my sewing and knitting projects here, as well as outdoor adventures and a few other happy things. Thanks for stopping by!

I'd love to hear from you! You can email me at bennomusik at gmail dot com.